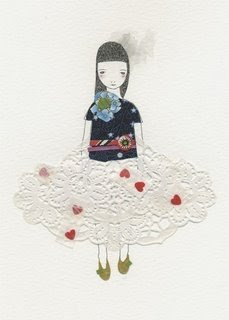 A Little Papercut
My Folk Lover 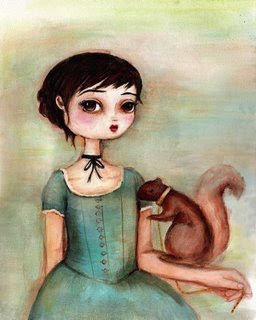 Squirrel on a String
The black apple 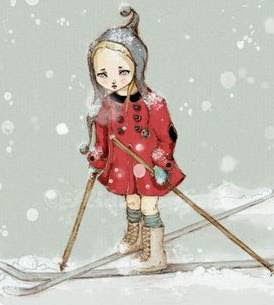 I could write that this morning, when my husband told me that there was yet another storm, I slowly pulled the blankets over my head wishing that I was across the country where the cherry trees are already in bloom. I could also write that going outside wearing wide leg trouser jeans was a bad idea because the wind pushed a multitude of cold tiny ice pellets into my pants and, at a certain point, it almost reached my underwear. Instead, I will write…well, mostly show…the work of three wonderful illustrators discovered on Etsy (where else?). Since I have no background what so ever in art, I decided to call it “cute darkness”. That style is, I must admit, not for everybody but I see such beauty in those uncheerful little women. 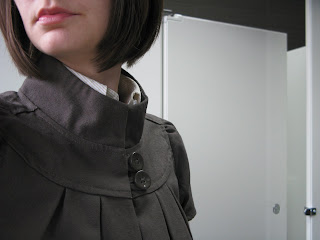 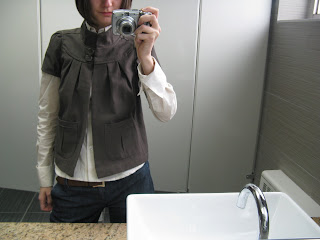 Being a little uncheerful myself, I decided to sneek into the nicest room of my office building which sadly enough is the bathroom on the 8th floor. While the receptionist probably believed that I had a serious digestive issue, I took my camera with me and had a little unplanned photo shoot that depicts my new jacket! Can you see the "french pout"on my face? What a day!

Note: I got my jacket at RW & Co (Canadian store).

french pout or not, you look wonderful in that jacket!! It is really a great business casual look and I'm terribly jealous. LOVE it!!

I hear you sister! I didn't set foot outside today. Although that did mean being trapped inside with two energetic children so not sure which was worse. Love the jacket. Effortless chic indeed.

I, too, love cute darkness. Thanks so much for the new-to-me links. :) I absolutely love your new jacket!

How cute are you!!! Loving the french pout and where on earth did you find that fabulous jacket???

The jacket it is great!

I agree I would have loved to just stay in my bed yesterday but it wasn't because of a storm but because I was reading a good book and didn't want to stop!!

Love the girl on skis - reminds me of my own experiences of skiing!!

I am also a fan of the cute, but dark girls. I have been eyeing that girl with the squirrel myself.

I know what you mean about the weather. I wish I could bury my head until this snow disappears and am longing for just a little green outside. Ah, patience!

I love all three of those prints. I have one from Black Apple and adore it.

Your jacket is fabtastic! Do you watch Project Runway?

I think it's very funny about the receptionist thinking you might have digestive problems. You need a fart machine to play while you are in there. Tee hee!

Your jacket is wonderful! I love it!

cute dark seems accurate enough. i have some black apple prints myself. I love her style.
The new jacket is awesome. i love the collar and the pockets remind me of a jacket i purchased recently. Perhaps i'll have to find a public washroom where to photo shoot aux petits oiseaux style!

Hope you are feeling a bit more cheerful now! The wind can make everything feel so awfully cold. I love those girls there and I can identify myself perfectly with the one on the skis!
If you check my blog, I have a small taggy surprise for you, if you want to do it.

Very cute...can you buy it online?

and now i also have to ask, where did you get that jacket? so great!

Hello, I really like your blog!! and I just notice that you live in montreal.. :-)

I'm going to Montreal in the August, I'll be there for 2 weeks and I was wondering if you know of something crafty happening there.

I hope you can help me..
Thanks!!!
Jordana