Domesticali is probably one of the first creativity blog that I ever read. Ali always has the right way of saying things...good or bad, funny or sad! This is why I really wanted her point of view about babies, motherhood and projectile poo! 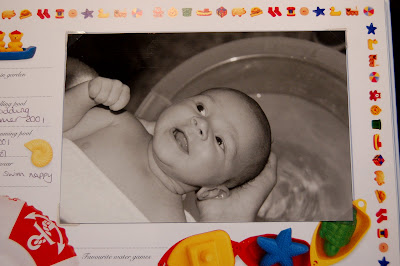 When Claudia asked me to contribute a little something to her mother project it got me thinking. What would I like to have known eleven years ago when this parenthood business first began? Honestly, what wouldn’t I have liked to know! I was so ignorant about the realities of babies. Before I had my own, I had only held a newborn about five times and I had changed precisely one nappy before confronted with those produced by my own firstborn.

But I figured I was an intelligent human – no eight pound scrap was going to expose my ignorance. So I embarked on a course of study. Really, I read every childbirth and babyhood manual I could get my hands on. I bought the magazines, I went to the Aqua Natal Exercise and Pregnancy Yoga classes. I took two childbirth classes and tours of the hospital and midwife led birthing unit in my area. I was going to be prepared. I’d tell you about the Excel spreadsheet I had for the baby equipment I thought I would need, but then you really might think I was insane.

And, in hindsight, perhaps I was (slightly). I had been made redundant when I was 5 months pregnant, which I was actually pretty pleased about, because I knew I wanted to stay at home once the baby was born. But it did leave me with an awful lot of planning time. And the problem is, it is truly difficult to plan for an unknowable situation. And a first baby is exactly that.

I think my preparations for the childbirth part of becoming a mother did serve me well. I made it through a hideous 36 hours of labour with a posterior baby and only gas and air. Mostly because I wasn’t frightened of what was happening to me. I think if I had been less well informed, the outcome might have been very different. Afterwards I felt really proud of myself – but there was no accolade, no medal ceremony. What, in my head had been the goal, was really the beginning.

I think I realized this the very next morning when all the grandparents turned up to see the baby. He began to wail and they passed him …. to me! They, with about 100 years of parenting experience between them and I was the one responsible??

And make no mistake, that learning curve is a steep one. Operating all the new equipment was enough of a challenge. The car seat, the pram, even my own breasts. Everything was new and I felt like an alien in my own body. Now add to that the exhaustion of having a newborn and the inevitable hormonal stew and you are left with a lethal cocktail. It’s a miracle anyone makes it through. Especially if, like me, you are a planner and think you have covered all the bases.

So, what advice do I have for new mothers? Lower your expectations, then lower them some more and still be prepared to feel like a failure. It’s part of the territory, and it’s not just you. Any day that ends with both you and the baby still alive and with a shred of sanity should be treated as a triumph. Learn to go with the flow. And when that’s hard, repeat to yourself ‘This too shall pass’.

Because no amount of preparation can teach you the art of dodging a projectile poo when you are changing a nappy. Some knowledge can only be acquired on the job. And it’s a pretty great one, it just takes a little getting used to, so be kind to yourself.

Thank you so much Ali.
Note to myself: don't say anything about the Excel spreadsheet!!!
xox
Posted by claudia at 14:25

Ali, what a marvellous post! I snorted all the way through it and almost (ALMOST) spat coffee all over my laptop when I reached the part about projectile poo!
Also, you are right, so right, I am on baby number four, and it's still a shock to the system! H

this is beautiful! and so true. it makes me happy to know i am not the only one who feels like a failure sometimes. and who thought i was prepared. so good to hear.

I tried to analyse my first baby. I collected data about sleep timings and feeds and made graphs. I gazed at them trying to make sense of it. How could I have been so foolish? Emma x

yup. That sounds all too familiar.

One hour at a time that's the way to get through it...

Good luck Claudia! And spot on, Ali - especially the part about expecting to feel like you're doing it all wrong!

I did the same insane graphing and colour coded charting thing as Emma - when I should have been sleeping. I may even still have the daft notebook with its lovingly embroidered cover. None of it made any sense. One wise midwife did say to me, when she saw me reading the Contented Little Baby (which I later burned), "The trouble is, your baby hasn't read the manual." How true.

The trick to a happy baby and ultimately a happy Mummy, in my opion, is a clean bottom and a regular breast. Ignore everything else, the house will still be dirty later (and someone else can do that)! Don't be hard on yourself, you are learning but remember baby is learning too, it's a scary world inwhich he's just arrived. And no matter what appears to 'go wrong' baby will always love his Mummy best and it's worth all the internal turmoil, being a Mummy (to four) is the best, most satisfying job I have ever had! Good luck xxx

Go with the flow, and expect to get it wrong most of the time.

And never ever wake a sleeping baby.

i've got baby no2 turning up in january and i'm sure i've forgotten just about everything useful i should have learned the first time round. however, i do remember someone saying that bit about making it through the day with you and the baby fed and clothed (in something - anything!) being a success and i think i'll be holding on to that again this time.
i'm also so pleased to read that i'm not the only person to have reached for the coloured pencils and chart!!

Fantastic advice and all so true. Well done Ali and good luck Claudia.

Listen to your instincts. Listen to your baby. Dump the books in the bin. First time round I was "Ali" second time I went with the flow. So much easier. It's exhilarating, exhausting, terrifying, amazing. You'll never be the same again. A x

Don't worry about housework, the house will be a mess till the baby grows up and leaves home. If someone offers to take it for a walk in the pram say yes and go to sleep.
For the first few months of frequent feeding don't think of night as sleep time, I used to sit in bed feeding listening to the silence and peace around us, baby snuffling and sucking, feeling content. Totally knackered but content.
Read Ginger Jumbles blog if you don't already as she is a wonderful new mother wordsmith.
Enjoy the most wonderful experience, the best thing ever.

Ali has hit the nail on the head. |It is all double dutch. The most important thing to remember is that everyone else is making it up too, especially the really organised ones you see out and about. Try to relax and enjoy it because it really does rush past in a blur. Oh, and one of the most helpful things I ever heard was that children don't really remember anything much until they are about 4 so even if you do make a few mistakes along the way, chances are they will never know!

oohh being a first time Mum is so exciting, scary, petrifying, amazing all in one :-) I remember worrying if I would love my child enough - pah what a silly worry, as soon as you see that little gorgeous thing you have created you can't help but fall in love.

My advice for a new Mum, relax, take your time, let your baby lead you and enjoy - it is truly amazing (and tiring and a bit yukky with the poo and sick but you get used to that honest :-)). oh and rest for a couple of weeks after the birth, proper rest - it took me until my third to learn that one!

I have had 3 children and each one has left me thinking that I know nothing about babaies. When you have a moment of just you and the baby, stop and breath in that newborn smell. Hold it in your memory. It will never leave you. Its very special that newborn smell.