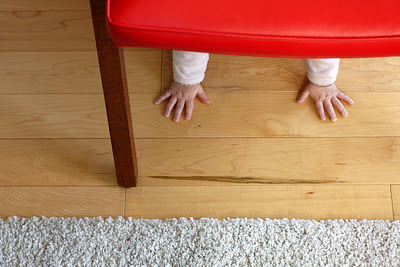 Alice has a little cardboard book that associates a cute illustration with a noise (well, the written version...the reader has to make the noise). She finds it hilarious and laughs every single time we use it. However, there is a little problem with the book. Dan and I think that there is some inappropriate content for a baby (5-6 illustrations). I must say that it is not racist, sexist or anything truly bad but you know! For example, yes, a gun makes "pan" (it is a French book from France) but is it crucial for my almost 8 months old baby to know that?

Thus the question: Is it just me or we are getting paranoid?

tiffany: Lets all agree that grand-parents get so freakin excited when they are around babies that they forget to be rational and can often get on our nerves. However, I just let go and move on...but I know that Alice will be grumpy the next day! I love to sleep nose to nose with Alice but, when she wakes up before me, I can get hit in the face many times...oh, sometimes, she sucks on my nose :)

dorian: A few months ago, Dan's dad was holding Alice and she was clearly not happy about it. The thing is that he didn't care at all that she was about to cry. I also wanted to scream "leave her alone".

gillian: I think that most parents have grandparent neuroses ;) Mia's grandmother, from what you wrote, looks pretty intense regarding baby advices. So annoying!!! Oh, I didn't know that cats were baby killer! I will be more aware of my cat's actions...ah ah ah! Yesterday, a man wanted to get Alice's attention and, yes, it totally looks like if he was calling a dog! Funny because Alice didn't react at all! And I totally agree with you about the "Until then, I'm happy to be puked on; peed on; drooled on and look like a total nerd if it makes her smile."

sara: Oh, mother in law! I don't think that there is anything wrong with your feelings. Mother's instincts can be very strong. Do you see her very often? Are going to her place for Christmas? Take care xox

hoola tallulah: Yesterday, I really wanted to tell a man in the subway to give us some space but it was easier for me to wait the 5 stations until I reach my destination. It was not really a space problem but a "omg, you are so annoying with your baby talk". He woke up Alice because he was very loud and I think that he was also a bit drunk but anyway. Not cool! I think that you did the right thing at the bakery.

a loopy life: I think that it totally counts as sitting when you have to put the baby in the sitting position instead...if not, well, Alice never sat ;)
Posted by claudia at 17:19

I think we defnitely are getting more and more paranoid but then it's no wonder when you see the media. Truth is though, paranoid or not, I don't reckon a gun should be in a baby's book. How does a gun convey anything educational? So no, I don't think you're being paranoid - just normal.

Hmm, in a small babie's book, kinda odd. I don't like the conotations of guns so much, not for kids stuff. However, Simon keeps banging on about getting Bear some toy soldiers, and I'm like why? Why do boys have to play war with violent toys? He reminded me boys have been playing with bows and arrows, guns, toy soliders etc for decades, and the vast majority are not gun wielding, war mongering psychos. I conceed he has a point... but I still don't like it.

Well, Alice doesn't know that guns kill people or guns are bad. There are thousands of things out of place in all children books. I don't like at all some "classic stories" as Snow White, Pinnocchio, Little Riding Hood, Cinderella, etc. I think this classic literature contents more than a baby or little kid can understand. I also don't like a book Emma's like the most because talks about a lazy sun that only wants tobsleep and does not want to shine, he has a little star that feeds him in his mounth, dresses him up, make his bed, combs his hair, etc. It doesn't sound creepy or whatever, illustrations are even very nice, but it reflects the way italian society treats little ones, some guys here take their kids on strollers 'till 6 years old to avoid them get tired!!!!. So, I just can't stand this lazy sun book.

My friend's mom has a funny story about how she made sure her son NEVER saw guns. No gun shows, no gun toys, etc. But somehow, when he was about 2, he started making guns (with his finger or other toys) and "shooting" everything, complete with sound effects. Maybe that's a boy thing, I don't know! I agree with everyone else that it probably doesn't belong in a baby's book and I think your "paranoia" is just being a good parent.

I wonder whether it's a cultural thing or simply the result of an unedited brainstorming of things-that-make-noises. Why don't you take a piece of paper, glue it over the gun and draw something else instead.