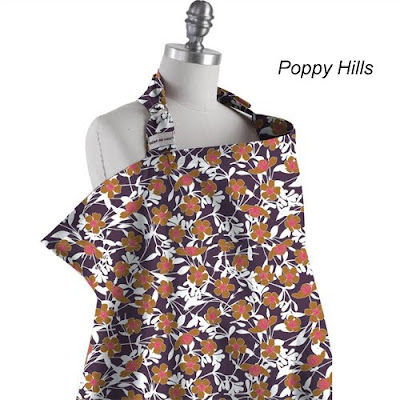 A few months ago, I wrote a post concerning two women who were asked to stop breastfeeding their babies by a salesperson in a downtown Montreal kid store. I was outraged by this situation and claimed out loud that nothing will stop me from breastfeeding in public. Well, easier said than done!

I quickly realized that many people get uncomfortable with the idea of a slightly exposed breast. You can see in their eyes that, even when they claimed to be fine with it, they would rather be miles away from the "feeding device"!!! Sadly, even if I'm not a shy person, this makes breastfeeding much less enjoyable.

This weekend, I had to feed Alice at a restaurant and even if Dan assured me that probably none of the customers knew that I was breastfeeding it felt slightly awkward. As a woman in Quebec, I have the right to breastfeed in public. However, I'm not sure if it is really socially acceptable.

So, even if I have mixed feeling about the product, I purchased a nursing cover. The feminist in me sighed, while I watched the company's online video, when the spokesperson said that a nursing cover allows you to breastfeed in complete modesty!!!

However, I must admit that the nursing cover was nice to use. The people around me looked comfortable (so I was comfortable) and, as a bonus, it protected Alice from falling pieces of butter croissant (and direct sunlight)!

little gray pixel, lin, mjb, ele, shine little light, co•co•marro, cal's mum, sandra: Thank you so much! I actually love to play dress up with Alice...strange because I was not into dolls when I was a little girl. xox

love to stitch: My mother made the cardigan and the hat is from a super talented friend.

oscarlucinda: Yes, I think that you are allowed to say cute too!!

bess callard: Thank you Bess! So, should we go for a coffee soon :)

bugheart: I'm so happy that you like my blog. Thank you so much xox

giselle: The bonnet was made by my friend (I should ask her where she got the pattern).

one claire day: Totally! There was a lot of warm cuddles! xox

la franglaise: My husband has zero baby photos (I think that it is very sad). I don't think that Alice will have that "problem"!

Eventually some babies get tired of being covered up to eat, so use it now while she's little to get her used to it!

By the time I thought "maybe I'll try using a cover", my son wouldn't tolerate it. He actually drew more attention by tossing it off than if I never bothered to use it :) Anyway, I say, whatever makes you & your baby comfortable while nursing, that's the right choice for you!

BTW, I'd definitely love to know about the pattern for the fox hat too! SO CUTE!

By 6/9 months my little girl didn't want to use it. I think it was because it was getting to be summer and she probablly felt warm being covered up. But the first few months I had one and used it and loved it. We would go out to lunch and I would nurse her and no one was the wiser. When she got older she was on solids so it became more predictable and we nursed at home or I would leave the room so that I could feed her.

I know people are werid when it comes to this stuff. Good luck and I love the one you picked out. You can also nurse her in the Ergo. I did that too when we went to street fairs and such.

hello
I think your friend may have gotten the cute fox bonnet from Ravelry. It is a free pattern called Cisco.

Alice cannot see your face, you cannot see her... that's sad : (
In Italy is the same think, here you can see breast everywhere but is a "big tabu" if you are feeding a little one. I just didn't care and Emma was hungry.

i am wondering
what it will be like
here in switzerland.
i suppose that
i will need
one of those
hooter hiders
(sigh).

I am not mother yet, but I am kind of preparing myself and I would like to thank you for all your intimate, generous and straightforward writing on the parenthood subject.

But it is only the first time that I have something to add since probably your three months pregnancy.

I saw one friend using her scarf for breastfeeding in public. It should be rather wide (about 50cm at least) and quite long as well. Also, if you take a lighter version (in both color and material), the baby will have the light and will not be hot.

The advantage is that like that you have a reason to buy a new summer scarf;)

p.s. Something important to add, the way you say things here makes parenthood look easier than many other writers do and at the same time it is not superfluous.

Pah! Have you heard of the book "Le conflit - la femme et la mère" by Elisabeth Badinter? I really enjoyed reading it, I think you would like it, too.

These weren't really available a few years back. My two would yank off any covering, so I became well practiced at pooling my t-shirt right next to their cheek, so no breast was visible at all. I'd wear a nursing shirt if I was going out in public and might have to feed in a completely open place, so that my sides and stomach would be covered from any side views. I'd say that I only once got a weird look, but I did take care that no skin was visible. Most people probably didn't even realise that I was feeding.