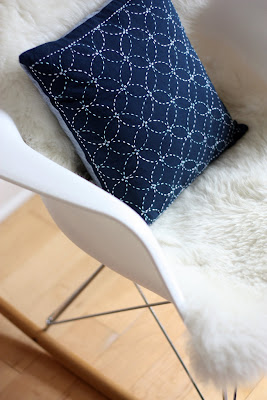 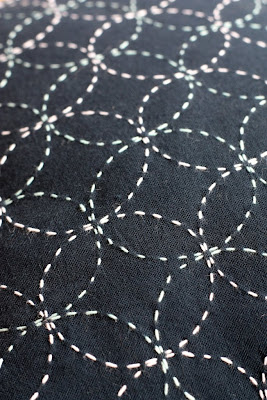 During our vacation, when Alice was sleeping, I discovered the fine art of Sashiko embroidery. I was looking for a no-brainer activity for those quiet evenings at the country house and Purl Soho had the perfect craft idea for me. I purchased a little kit a few weeks ago and read their Sashiko tutorial approximately ten minutes before we started our road trip.

From what I understand, Sashiko embroidery is from Japan (of course!) and passed down from generation to generation. I read that this skill would also be used to judge a woman's suitability for marriage, ah! It is generally done in white cotton thread on navy blue fabric. Since I'm a bit rebellious, I used white and pale blue thread (but you can't really see it on the pictures).

Have you ever tried Sashiko embroidery?

taryn: The first day or two were difficult since I wanted to do certain activities but I knew that Alice would not be happy there (too long and not kid friendly). As you said, I will be fully ready for the next trip.

daniela: Alice doesn't have a pacifier but I think that this could have helped her with the ear-popping incident. We tried to find a drugstore or a grocery store on our way but nothing! What did you do with Olivia during the airplane trip?

Oh look at those perfect intersections of yours! I love Sashiko.

I've never tried Sashiko embroidery before, but this makes me want to. It's so beautiful Claudia!

it's so pretty! you are now suitable for marriage.

your stitches are so good. i love doing sashiko. something i learned while in japan. i need to make for time it!

That is gorgeous! I so want to try that myself! Just perfect!

Hi! I breastfed her, but that is a bit easier at an airplane than in a car I guess... Breastfeeding helped a lot though. She still felt it on the first landing and stopped feeding for a moment and touched her ears, and started crying, but it soon passed. The next landing, I fed her again, and it helped completely.

I've been tempted by Purl Bee's sashiko for a while, but have held off so far. Resolve: weakening. Beautiful work!

I looked for sashiko info when we were in Japan a few years ago and couldn't find anything, even in their big craft stores that seemed to have everything else. I need to figure out better places to look before we go back!

wow! you did an amazing job, it is beautiful. i've never tried it but would like to. although i'm not sure when i will get a minute again to be creative.....

glad you had a great trip! it sounds so peaceful.

This is beautiful. I've never even heard of it before! *s*

I've dabbled a little bit but never accomplished anything really bit. You've reminded me that I have a half finished pot holder/trivet tucked away in my sewing room. It's probably time I pulled it out and finished it off :)