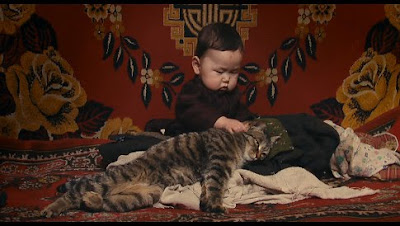 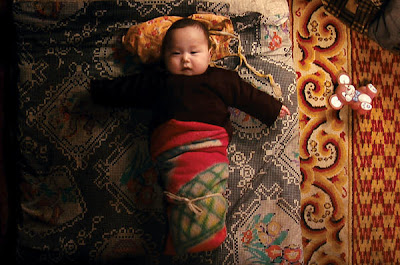 Dan and I just watched Babies and our conclusion is that we have to pack our stuff and move to Mongolia ;) No, I don't like goat meat enough for that but Bayar, the Mongolain baby in the film, stole our heart!

The film is adorable and made us giggle many times. The images are stunning and for ignorant people like Dan and I it is very interesting to see the babies' evolution over a year. However, I think that some people might not enjoy that much cuteness without dialogue and narration. But this is why we have imagination, right!

Another little "problem" that I have with the documentary is that it is almost too perfect. None of the kids get sick, no mothers seem to be sleep depraved and strangly enough the dads are almost never on camera. Oh well!

I might be a little biased considering that I basically dream about babies every night but I still give the film a 7.5/10 (and I could add some bonus point because the animals in the film are awesome)!
Posted by claudia at 21:23

The cats were my favorite part about the movie. I'm a sucker for cats -- not so much babies lol.

I tell my husband that I'll probably love our kiddo more if he has whiskers ;)

We watched this over the Xmas holidays and although we did enjoy it I was a little disappointed. The photography is great but I felt there was something missing. It looks too perfect, thus a little unreal and misleading for expectant parents. It's not that easy having a baby!