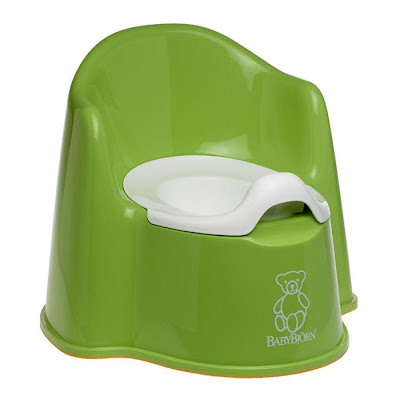 When I was pregnant, Dan and I watched the film Babies. Later, while making our list of things to buy for the nursery, we added a dried corn cob. Why? Well, in the film, the Namibian mother cleans her baby's butt with a dried corn cob. Aside from the fact that Dan and I are immature (!), my point is that there are many ways to deal with the "joy" of baby poop and pee.

I will confess that, until 14 weeks ago, I had never changed a diaper. The concept slightly horrified me especially knowing that on certain (multiple) occasions I gagged while picking up my dog's poop on a hot summer day or trying to catch my long hair kitty cat to remove a piece of poop stuck to his tail (not cool)!

Anyway. It turned out that changing Alice's diapers is really not a big deal. I actually get satisfaction looking at a brand new diaper perfectly installed on Alice's little body (don't tell Dan but sometimes I re-adjust Alice's diaper after he changed her...yes, I'm a perfectionist freak)!

If the Namibian mother was next to me while I perfectly attached the "velcro" on Alice's diaper she might tell me: "How come Alice is not a diaper-less baby like Ponijao (the Namibian baby)? You should try elimination communication"!

Elimination communication is a toilet training practice (inspired by traditional practices of diaper-less baby care in less industrialized countries ) in which a caregiver uses timing, signals, cues, and intuition to address an infant's need to eliminate waste. Caregivers try to recognize and respond to babies' bodily needs and enable them to urinate and defecate in an appropriate place like a toilet (thank you Wikipedia).

However, if the Namibian mother was next to me I would probably ask her: "Really? Do you think it is realistic to try elimination communication in an industrialized country not really open to the concept of a 3 months old diaper-less baby?" I would also add in a sarcastic voice: "I can't wait to try that next Saturday during brunch!"

Dear blog friends, since I don't know the Namibian mother at all, may I ask for you opinion on the subject? Have you tried elimination communication or are you a believer in "traditional" toilet training?

little gray pixel: As soon as I get it, I will let you know.

taryn: Yes, hopefully it will work!

one claire day: Ah, if only I could be Scandinavian ;)

fast times in münchen: THANK YOU!!! Because of you, I know a little girl who will get adorable shoes very soon!!! xox
Posted by claudia at 08:23

haha, I've often thought the same thing. I have a book about elimination communication and it makes perfect sense but it's a little bit more difficult in North America :) I have a few friends who have 9 and 10 month olds who use their potty's frequently. I have never tried it for my babies but we do use the concept for potty learning. My two older girls where completely out of diapers by 20 months because we used a lot of the concepts to help them relearn to control their poops and pees.

No, no, no. I don't see that it's realistic, in my experience.

I can usually tell when baby is going No. 2, but if I tried to leave her diaperless I would get peed on all. the. time. She does it without warning!

this is great! i spent much of my pregnancy (up to 30 weeks) in china and "elimination communication" is how things are done over there. in fact, a friend of mine just returned to canada and brought luke a pair of split pants (pants without a bum - almost all babies in china run around with their bare bums hanging out in these pants so parents can respond quickly to their needs).

since i had baby brain i spent a lot of time noticing these bare bum babies and i just don't think it would work in canada. it could be an at home only thing, maybe, but in china it is perfectly normal for a kid to pee on the floor of any place (airport, restaurant, mall) and poop in any outdoor space. it's not uncommon to see a grandma run out of a restaurant and plop her grandbaby on the nearest patch of grass to do its business. i like the idea, kids are pottytrained very early!, but i agree that in canada it would be very difficult.

there are so many cultural differences around child-raising, it's really fascinating!

I did it with my first child and it worked fine. You do really have to want to do it though.

I was intrigued by the corn cobs in Babies too! I think standard potty training will hopefully work ok - but I draw the line at those weird potties that clap and play music when baby has pooped into them. That's just deranged!

Claudia I love your blog, you make me laugh very much. I have a baby girl 20 month old and I have gone through all the same questions you have, toys, diapers, coosleepping vaccination and of course EC. I usually never comment but here it goes. I've discussed this with my pediatrician and she told me something that has been the best piece of advice on having children: intervene the less that you can, every kid eventually will get there and they must do so in their own timing, and don't forget Freud that many of this fecal things are linked to sexuality, I wouldn't want to risk this with my baby and I'm not very pro Freud. Babys have this moment when it seems logic to do EC but if you do some search there comes a time when babys stop being interested in the whole process and potty training is one of those power struggles for toddlers so it should be done when they are ready! Plus coming from a third world country I feel that there is an idealization from the west on how children are raised in country's like mine, about children being breastfeed for years, no vaccinations, EC and many more stuff and believe me that when being so close to poverty and uneducation you really think about this trends twice, because kids in this countrys suffer very very much. Wow what a long post! Sorry!

Haha, I was very amused by the corn cob - surely it's quite scratchy?
We know a couple who did this with their two kids (the no nappies, not the corn cobs) and I thought they were nuts, and it confirmed to me they are weird hippies. However, Babies did get me thinking. And then I saw this article recently, and it sounded so simple:

I have to say now I'm a bit tempted. I was wondering if it'd work with reusable nappies (sorry, diapers for you guys) so if you did miss a cue, it wouldn't matter. Now I'm sort of keen to try it!

I think the idea of EC is interesting, but doesn't really fit my family's lifestyle.

Hi Claudia - I read your blog regularly but don't really post usually, since it seems like an in-house conversation usually. But this time....

I had my 3rd just before you, and I'm doing EC this time, whereas in the past I thought it was only for weird control freak moms. And actually it's really, really easy. It goes along with the minimalist approach that I have towards baby-stuff, ie no need to buy loads of baby gear. He sleeps with us, wears second hand (albeit cute, sewn, hand-chosen) clothes, second hand washable diapers etc. I don't go around diaper-free, I just hold him over the toilet after feeds, or when he's just woken up, basically every time I change him. He still uses diapers, just a lot less than he would have! He seems to enjoy 'doing this again', recognizes the cue and wees every time. I have only had to wash one pooey diaper a month, pretty much. Oh, and I wipe his butt with normal toilet paper, or a wet washcloth if it really needs it. I hardly tell anyone I'm doing it though, because of the weirdness of the idea. If we're out, I just expect him to use his diaper, and/or I shut the stall door in the ladies room and no one ever has to know. As for the Freud complex - I don't think that EC makes that worse, but rather treating poo as if it's disgusting and that private parts are embarrassing and untouchable, that's what creates Freudian problems. EC is just being easygoing and natural. Messes happen. So what?

BTW, you might have noticed that if you have Alice in the sling she hardly ever uses her diaper -they won't pee on you. It makes going out EC easier if you're babywearing.

In the end, all this sure saves us a lot of money, which is super tight right now. And now I've said my bit....

Anyways, you're doing well, researching, and learning as you go. And looks like you're having fun. =0)

Sarah, I totally agree with you on the Freudian thing... Potty training was never an issue with us... just try to make it to the potty and if you don't oh well. no treats, no punishments. My girls loved learning to use their potties and were completely out of diapers well before two. It was actually a lot of fun!

I plan to try elimination training when my baby is born. I have a friend who successfully did it with both of her girls. Her kids were never without a diaper though. She calls it parent training. You learn the cues and then go from there. Sometimes you can't take them to the toilet and that is ok. She had both of her girls fully out of diapers by 18 months old. I LOVE that idea.

i did and i do (in moderation). i learned very early with Little M that he wakes from his naps with a dry diaper and pees within 5 minutes of waking so catching those pees in the potty is easiest. i know his pee face as does Little A so if i'm not around to see it i usually get an update and the wet diaper can promptly be changed. it's awesome. with Little A i kept a potty in the car - he was more private about that sort of thing than some of his friends who had no problem using the potty at a park. i'm certainly not going to tie my kid to the potty but it's working for us somewhat.
check us out in the early days;
http://www.flickr.com/photos/ellapedersen/4911850474/in/set-72157624055883080

The EC things doesn't fit my family either. As far as my babies were concerned, they got potty trained at an early age. I followed the simple procedure of "rewarding". That is giving reward every time they do what you say.

But i still went on putting diapers on for longer time because you can never trust your baby's poop. It can turn up at the wrong time! :-)